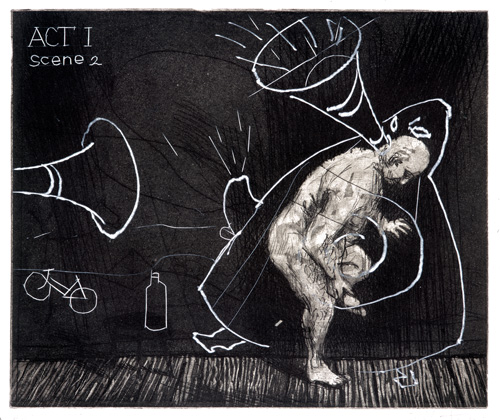 South African artist William Kentridge is best known for his prolific and versatile output that encompasses animation, film, drawing, collage and sculpture amongst others. This Hayward Touring exhibition asks us to pause and consider Kentridge’s contribution to printmaking in its own right. Featuring works from 1988 to his most recent body series in which the title is derived, Universal Archive (2012), it is the largest exhibition dedicated to his prints ever seen in the UK. The majority of Kentridge’s work is executed in black and white, often threaded by a layered and complex narrative that incorporates both personal and universal themes. In the series Ubu Tells the Truth (1996-97) the protagonist of the prints Ubu Roi, a creation by playwright Alfred Jerry, is split into two by Kentridge through contrasting colours and mark making. Here Ubu is in conflict with himself, a detailed and meticulous inner body attempts to cleanse the sins of his monstrous ‘outer’ persona, represented by free flowing abstract lines.

Kentridge’s exploration of complex social and political themes, such as the apartheid era in his native South Africa, is present in the exhibition but is equally matched here by an intense engagement with references from literary and art history. For the prints in his Nose Series (2007-2009), Kentridge splices images from the literary figures who inspired Gogol to write his short story The Nose (1927-28). The ensuing prints can be read as both individual works and investigative studies. A large majority of these images eventually appeared as part of Kentridge’s set design for his own production of The Nose, held at The Metropolitan Opera in New York in 2010. Often purchasing books from second hand bookstores when he travels, Kentridge removes pages from encyclopaedias and classic literary texts to directly print on. In the midst of the layering of pages, single words and fractured sentences often emerge through the gaps in the dense ink.

The recurring ‘characters’ throughout Kentridge’s work, such as coffee pots, the cat, pylons, the typewriter; are often printed in this style. His personal relationship with these objects even conveys anthropomorphic tendencies, such as the recent work Self Portrait as a Coffee Pot (2012). Aside from rich contextual subject matter, what stands out in this exhibition is the sheer mastery of Kentridge’s printmaking skills. Effortlessly interweaving different processes, Kentridge moves from small etchings to large linocuts with ease, retaining the same range of expressionistic mark making that his smaller drawings and animations possess. The tension between the act of ‘thinking physically’ through mark making and the collaborative and considered act of printmaking is one of the most interesting aspects of the exhibition.

As insinuated in the title, A Universal Archive is comprised of a series of works that demonstrate a flow of re-occurring characters, themes, concepts and techniques. While his excellence as a printmaker is undoubted, confining such a strong and interrelated practice to a single medium is a highly disciplined act for an artist as diverse as Kentridge. However this rewarding exhibition portrays Kentridge’s engagement with printmaking as a significant activity that has always been crucial to his wider practice. It is a medium that he has consistently returned to, long after studying etching at Johannesburg Art Foundation in 1976-78.