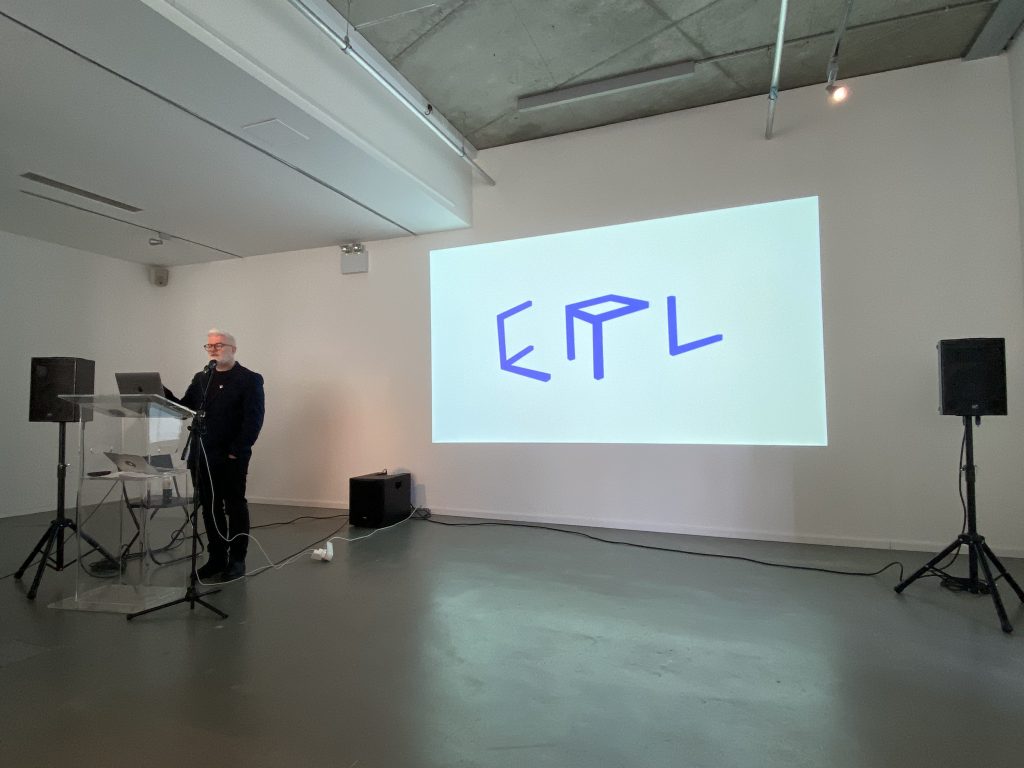 This report was commissioned and published by Corridor8 and can be read here.

On the drab January day that the United Kingdom left the European Union, a healthy audience gathered at the Exhibition Research Lab (ERL) in Liverpool to talk about the unspoken issues impacting the artist-led. While taking the form of a traditional academic symposium, ‘What We Don’t Talk About When We Talk About The Artist-Led’ managed to ensure that the artist’s voice was the most prominent throughout.

The symposium marked the culmination of the first year of ERL’s Open Forum series, featuring talks from Liverpool artist-led initiatives OUTPUT gallery, ROOT-ed, and The Royal Standard. These talks gauged the temperature of the city’s artist-led scene while providing a platform for the practical issues and challenges of arts organising in the current socio-economic climate. The same ethos underpinned this day-long event, which aimed to draw out and tackle issues related to the artist-led that often lurk beneath the surface of public discourse.

Symposium organiser James Schofield (also Corridor8’s Greater Manchester, Lancashire and Cumbria editor) opened proceedings by suggesting that artists operate in a collective state of ‘learned helplessness’. In appropriating Martin Seligman’s theory, Schofield persuasively argued that artists have become conditioned – and resigned – to the structural inequalities propagated both by the contemporary artworld and neoliberalism; the exploitation of artist-led activity within the cycle of urban gentrification being a prominent example. Emerging artists initially resist this inertia but are gradually worn down into acceptance of the situation. In order to address this, Schofield suggested the adoption of new creative approaches to self-organise and combat these frameworks, such as harnessing digital tools to ‘disrupt’ existing structures.

‘Artists have become conditioned – and resigned – to the structural inequalities propagated both by the contemporary artworld and neoliberalism.’
Such an approach is evident in 12ø Collective’s Backend project, which focuses on the lack of accountability within artist-led organisations. Presenting outcomes from a series of collaborative and facilitated workshops held in artist-led spaces in Liverpool (OUTPUT gallery), Glasgow (Transmission Gallery), Wakefield (The Art House) and London (Block 336) in 2019, 12ø Collective highlighted the key issues that emerged, with each workshop influenced by the context of each venue. These included: voluntary and value, privilege, the dispersal of power, labour and the decolonisation of the gallery, unconscious barriers and accessibility, public funding, and professionalisation. The outcomes of these workshops have resulted in the first stages of a collaboratively written ‘code of conduct’ for artist-led organisations. It initially seems like a great idea, with the long-term potential to generate a shared approach to enacting change. However, the steps to get there could be turbulent, from wrestling with the nuances of terminology to frustration at the slow pace of development.

The problematic nature of the language associated with the artist-led was a recurrent issue throughout the day. Perhaps unsurprising given the recent launch of Arts Council England’s ten-year strategy, in which the term ‘artist’ has been side-lined for ‘creative practitioner’ due to its supposed lack of inclusivity. In her presentation, Dr Emma Coffield called for a specificity of language when describing the artist-led, suggesting that the plurality of specific terms – such as artist-run, artist-led and DIY – is important for articulating the texture, ideas and motivations that drive these projects. In contrast, clunky umbrella terms often reinforce the dominant and unsustainable volunteer-led, white cube gallery model, one based on privilege that excludes many. In this regard, both Coffield and 12ø Collective – mind the incoming pun – seem to be speaking the same language.

Katy Morrison engagingly declared her complete exhaustion – not only mental and physical, but also with trying to maintain artist-led activity, juggling two jobs and a personal life, all while swimming against the strong tides of a broken system. We hear you, Katy. This proposal of exhaustion as a critical methodology has mileage; a method for breaking down the walls constraining the artist-led, something Morrison and collaborators will be testing with new curatorial project PINK. As Morrison asks, could banging your head repeatedly on a wall lead to a new ‘critical elsewhere’, or just give you a throbbing migraine?

Divergent notions of authenticity were touched on by Sufea Mohamad Noor and Dean Casper. Noor’s accompanying zine, emblazoned with a series of amusing slogans in deep red text, including, ‘Why do you need a logo for everything?’, playfully, but adroitly, queried why artist-led organisations mimic institutions and what could be drawn from this. Casper, of art label Caustic Coastal, employed the cycling term of the ‘peloton’ as a metaphor to describe problems stemming from projected authenticity: those who adopt artist-led activities are often riding at the front, visibly boosting their careers; art institutions benefiting from artistic activity ride in the middle, reaping the rewards; with individual artists languishing at the back. Both challenged the pressure to professionalise and the institutional exploitation of artists, asking questions that perhaps aren’t asked enough.

Susan Jones emphatically tackled the lack of funding head-on by highlighting the lack of financial support for individual artists and artist-led organisations. Few artist-led organisations are funded by Arts Council England and those that are get only 11% (£4.8m over a 4-year period) of the visual arts NPO budget, and as previously noted by Jones, only a small proportion of GftA awards in 2014/15 were allocated directly to support artists’ research and development. This situation has evidently become worse given that the new, and highly competitive, Developing your Creative Practice grants are almost 17% smaller than the previous average GftA grant, emphasising the human element, with those who can write grant applications prevailing in spite of the emotional and economic stress of maintaining a practice. The difficulty artists have in acquiring the unrestricted funds needed to develop their work was also evident in Lauren Velvick’s example of Hull’s historically experimental and theoretical art scene being at odds with ACE’s output driven agenda. As Jones memorably stated, it is a strength not to be output driven. Too bloody right.

The precarious nature of artistic activity within an aggressive property market is well known, and anyone with experience of this could easily draft their own ‘artist-led space bingo’, including crap broken buildings, bone-chilling cold, damp, dodgy landlords and even dodgier terms. John Wright (Retro Bar at the End of the Universe) and Dan Goodman (System Gallery) relayed their respective experiences of converting empty commercial space into gallery spaces, including the resulting emotional impact. Wright’s account of bonding with peers when converting a derelict pub in Baildon, and how it fostered the collective sense of social purpose that defines Retro Bar at the End of the Universe, will have resonated with many in attendance. His intriguing emphasis on the hauntological nature of temporary art spaces triggered my memories of the former derelict pub that The Royal Standard first occupied in the mid 2000s. Additionally, Dan Goodman’s honest account of the sudden closure of System Gallery in Newcastle told some genuine truths. Over five years, System Gallery had developed into a space that supported emerging artists while generating rich social value for numerous people; but not cash. His talk was set against a depressing slideshow of a WhatsApp exchange with the landlord of the space ordering him to vacate immediately. Goodman then presented a slide in which he deconstructed his own restrained public statement announcing the closure, adding in a fair few fucks and home truths that he felt unable to disclose at the time. This raised an important retrospective point: why do we resort to platitudes of resilience and mild acceptance when, as Goodman suggests, anger and an acknowledgement of loss might be more productive forces when rallying against capitalist hegemony?

While the majority of presentations engaged with contemporary issues, Dr Dave Beech’s keynote situated the artist-led within a wider historical and anti-capitalist framework. Tracing the lineage of artist-led activity, Beech highlighted how, in 1785, Joseph Wright entrepreneurially organised a one-man show in Covent Garden as a ‘fuck you’ to the Royal Academy after a quarrel regarding the display of his paintings. The eventual split between the public ‘virtuousness’ of the academy and artisanal craft of the guild defined a longstanding antagonism between art and commerce, which has amounted to a form of social differentialism in the arts, otherwise known as privilege. This also established many of the entrenched myths of, and values attributed to the artist today, often established on morally dubious grounds. In closing, Beech adopted Alan Sears’ notion of ‘infrastructures of dissent’ in calling for artists to mobilise in ways that don’t confer privilege; to forge new artist-led models that challenge capitalist frameworks.

With repeated calls to formulate new models, it was encouraging to see two examples of collaborative practice that aimed to affect change. Research project More Than Meanwhile Spaces, for example, brings together academics from Newcastle University and artist-led organisation, The NewBridge Project, to collaboratively explore new models for creative practice in Newcastle. Several aspects stood out, including its positive cross-disciplinary approach that seems to ensure a balance of salaried, skill-based professionals as opposed to relying on voluntary labour. Language proved once again to be important, but here rather than art-specific terms, the necessity to find a linguistic common ground amongst a wide range of actors, from businesses to local authority, was emphasised. The use of existing resources to test new models was articulated by NewBridge’s Rebecca Huggan, who argued that ‘change must be led by organisations already there’. If More than Meanwhile Spaces proves successful in forging new approaches to setting up artist-led space, there could be wider implications, despite the geographical imbalance of resources in the UK. With the high street model in a death spiral, alongside a continued shift towards the experience economy, could there be opportunities to negotiate new terms and fluidly test new models in the near future?

In her comparison of artist-led models in Hull and Preston, Lauren Velvick noted how the failure of consultants to draft a suitable ten-year cultural strategy for Preston has created an opportunity for local artist network Brewtime to develop ‘Something’s Brewing’, a collaborative twelve-year strategy between key organisations and the local authority. The emphasis here is on ground-up working, empowering artists to make change and giving them a shot at developing the infrastructure to embed culture within the lives of Preston people, by supporting artists directly, commissioning work and organising a festival in 2020. This raised the issue of why consultants are being dropped in to create homogeneous, uninspiring and crap cultural strategies when artists aren’t being supported in the first place, or wider structural changes implemented.

With the day comprised of fast-paced presentations there was minimal time to take stock, and several pauses for thought were welcomed. Juliet Davis-Dufayard’s simple but impactful activity asked the audience to pair up and ask each other direct questions – such as ‘Who does this matter to?’, that riffed off of issues throughout the day. 12ø Collective closed the symposium by convening group sessions that returned to their draft guidelines produced for Backend, exploring topics such as ‘care’, ‘value’ and ‘time’. However, the remaining twenty-odd minutes wasn’t nearly enough to explore these in any detail.

An academic symposium, arguably, isn’t the right forum for the artist-led; calls for action always look better in practice than at the institutional lectern. However, there was much value here. The importance of sharing new perspectives, exchanging knowledge (including with those beyond the artist-led) and highlighting possible pathways forward shouldn’t be dismissed, nor ERL’s ongoing aim to establish space for critical discourse on the artist-led. When transcribing my notes, several terms repeatedly cropped up: openness, solidarity, generosity, fairness, sharing, disrupting. Beech’s ‘infrastructure of dissent’ in particular seems important in relation to this lexicon: without evidence of material action, including offering capacity and resources to those engaged in struggle, solidarity is purely symbolic.

Jack Welsh is a producer and writer based in Liverpool.

What We Don’t Talk About When We Talk About The Artist-Led took place at the Exhibition Research Lab, Liverpool John Moores University on 31 January 2020. Recordings of the day are available upon request.

This report is supported by the Exhibition Research Lab and Arts Council England.