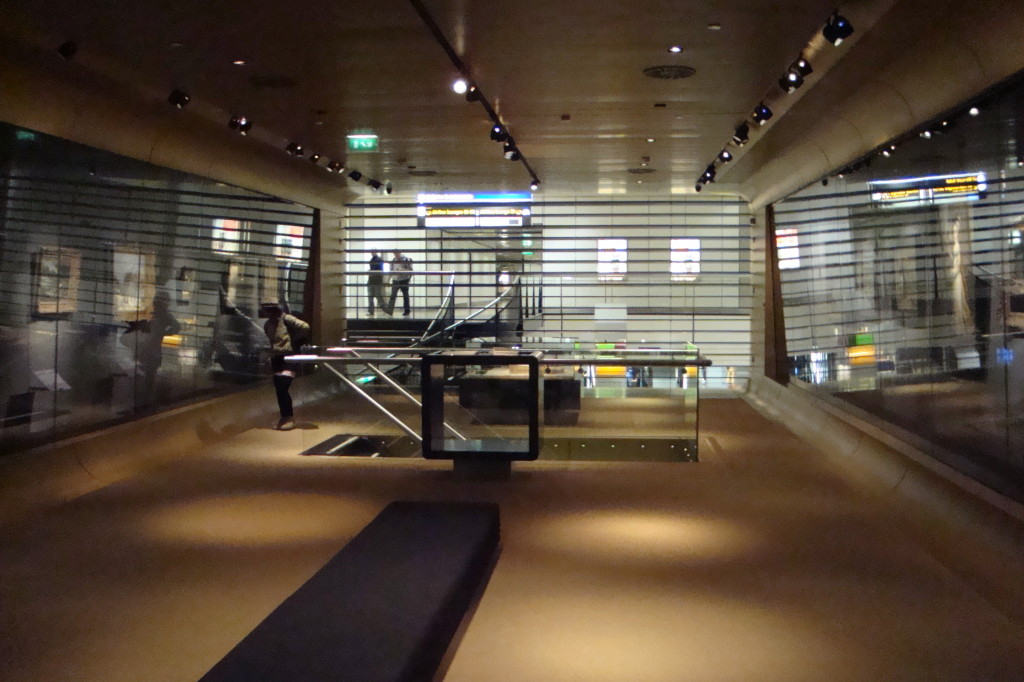 The Rijksmuseum, Amsterdam Schiphol: The Museum within the AirportCity 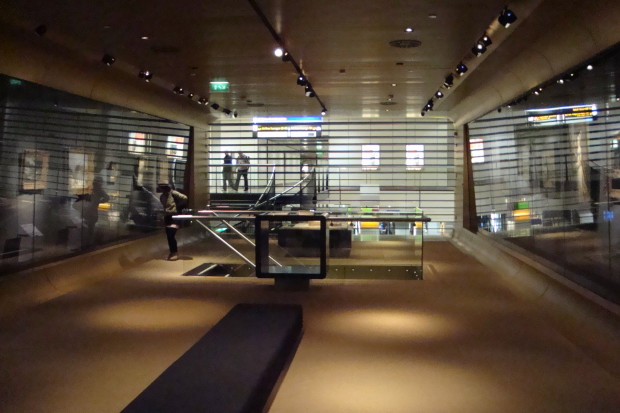 Schiphol Airport, the gargantuan site located on the outskirts of Amsterdam, is Europe’s fifth busiest airport and the fifteenth busiest in the world, according to 2010 passenger figures. A truly multi faceted transportation hub, Schiphol is a European gateway that caters for the Dutch capital’s ideal geographical position within Europe making it a prominent stopover destination for long haul flights across the world. At Schiphol (provided they are in receipt of the necessary documentation of course) a traveller can debark from a train from Berlin at the vast underground station directly underneath the site and be checking in to their flight to Shanghai ten minutes later.

Taking an escalator from the underground station to the ground floor, the traveller strolls through a massive seamless pavilion of retail units, coffee shops and eateries, passing huge high definition electronic information boards en route to the check in terminal. The distances on the predominately English/Dutch signage that punctuate the space between check in desks, terminals and departure gates are measured in chunks of minutes between each stage. After entering through the appropriate gate and successfully passing the first stage of security, the traveller enters into the departure terminal. Schiphol employs a one terminal concept where travellers may walk between the three main terminals without segregation. The result is one vast hall and is the primary reason why spatially; Schiphol maintains a constant aura of vastness and an unusually direct flow. Numerous floor escalators are installed in an attempt to quicken the journey. The hall itself is populated by a differing set of retail units, eateries joined at this stage by executive first class lounges, hotels, and an endless array of amenities that offer pampering and relaxation.

It is here beyond passport control that Schiphol seeks to cement its position as an experience beyond the ordinary airport environment with a renewed assault of chains and amenities aimed at maximising the experience. In between departure gates and on the stretch of terminal space dubbed ‘Holland Boulevard’ the traveller with is presented with a selection of predominantly Dutch related amenities (to be elaborated upon later). It is in this section that they will encounter the Rijksmuseum, Schiphol. The main Rijksmuseum, based in central Amsterdam centre, has a notable main collection featuring paintings by Masters such as Vermeer and Rembrandt. It is one of Amsterdam’s main attractions and boasts continuously strong visitor figures and a handsome international reputation. As Banksy’s film ironically stated, entrance (and exit) to the museum is through the gift shop. You are required to navigate it to enter the space. The museum encompasses a fabricated structure where entrance is achieved via stairs directly above it. Once you enter the elevated room, you are immediately immersed within the traditional controlled gallery environment. The works, currently all classical Dutch and Flemish paintings and ceramics, are behind glass and the lighting levels bestow the contemplative hue. Interpretation text is served in hearty doses alongside the works and there is a wooden model of the plans for the soon to be refurbished Rijksmuseum site in the city.

The exhibitions in the museum are featured on a rotational basis and exhibition themes draw upon works from the Rijksmuseum’s main collection. Exclusivity is a factor here. The airport markets a big differentiation between the amenities available to the traveller once they have navigated passport control. The museum is only available to those who have forked money out for a ticket with which they will board a flight. The function of this ‘branch’ of a respected arts institution within the airport context deserves further analysis. Located on a strip of retail units entitled ‘Holland Boulevard’, the Rijksmuseum operates primarily as a facet of the Rijksmuseum brand. The nationalist theme of its surrounding area, an area dedicated to promoting Holland, is reflected by the content of the museum – what better to promote the strength of Dutch culture than a handful of centuries old classical Dutch/Flemish paintings? The strip itself seems as if it is an innocuous attempt to position a Dutch identity (already watered down by the considerable use of English to communicate and plethora of nationalities passing through) within the ‘non-place’ context of Schiphol.

However, apart from the cynical viewpoint that the presence of the space amounts to little other than the implementation of a frankly excellent marketing tool for the institution and to sell merchandise via the gift shop, it’s presence does open up intriguing dialogue for the potential of exhibition spaces within the context of a transient space in the airports. The Rijksmuseum is a willing participant in this system as it falls in line with the overall environment of the airport. Realistically, it has little choice, as the control of these environments is so intense that there is practically no room for experimentation or manoeuvre – the terms of engagement are dictated by the airport, or in Schiphol’s case, the size and aspiration of the airport. Schiphol’s subscription to the AirportCity model is critical. ‘An AirportCity is a dynamic environment integrating and enhancing people and businesses, logistics and shopping, information and entertainment. This efficient, multi-modal hub for air, rail and road transport is a seamless link in the travel process that provides visitors a unique experience.’ It is this statement (taken from the Schiphol Group website) that opens up the reading of the Rijksmuseum Schiphol.

The sheer size and ambition of the airport to be more than a transient space – the term aerotroplis being bartered about for vast spaces that outgrow the basic means of travel – makes it inevitable that the placement of a social tool, a museum in this instance, be incorporated as part of the fabric of this swollen model. These monstrous airport cities are including increasingly utilising and incorporating new ways of satisfying the seemingly insatiable human need for instant gratification and connectivity. It is natural that art be thrust in to it. The terms of its inclusion though is what makes Rijksmuseum Schipnol such an intriguing venture. 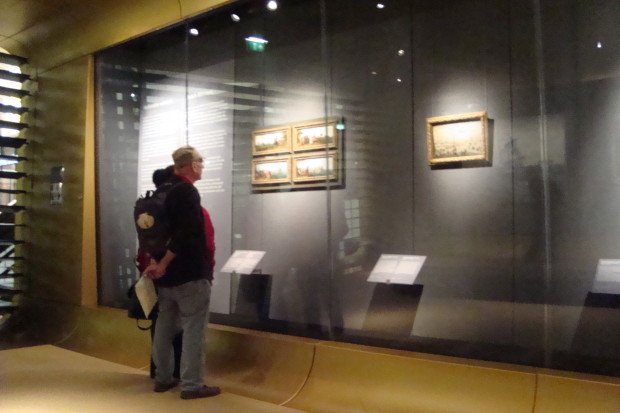 Of course, art within an airport context isn’t a new development. Rijksmuseum Schiphol opened in late 2002 and art programmes are heavily active in large US airports such as Denver, Philadelphia and Miami. The models of art vary here from rotating displays organised independently organised by the venues to permanent sculptures, murals and paintings. Rijksmuseum Schipnol refers to itself as a ‘museum’ and as we know, the function of a museum – regardless of size and location – is to guard and showcase historical works of art/objects presenting them in either a permanent or temporary exhibition. Whilst the relationship between viewer and venue is universally defined by a mutually accepted manner of conduct, the circumstances of entering the airport museum are governed by exceptional parameters. The traveller is acutely aware of the temporal significance of their presence within the museum. A viewer in a city gallery context will (for the majority of the time) have a predetermined idea of the time span they will inhabit the venue for, the traveller knows that they are positioned within a fixed system and must comply with the stringent regulations placed on their time.

This marshalling of the essence of freedom impedes the overall likelihood of the possibility of any real engagement with a work of art on show in this model. Paradoxically, these constrictions render the process of viewing work in this environment more interesting. It is why the potential of showcasing work in the environment needs to be investigated further. Rather, the key to a successful and engaging future showcases of work lies within the relationship and trust that would need to be fostered between the cultural institution and/or artist and the holding group/management of the facility. The goal of any future museum that seeks to exist amongst the orchestrated dynamics of the environment of the AirportCity, needs to be defined. As the controlled development of these environments will only intensify in future years, the attempts to work amongst these perimeters will surely continue to jar against the permanent severity of airport security. That is why entering into dialogue and building a real and pertinent ongoing relationship is the only viable option if showcasing work in these environments is going to be worthwhile. Would a display of contemporary artwork that is risky, evocative and engaging be able to be successful in this controlled environment?

The Rijksmuseum is able to undertake their Schiphol venture due to their resources but their presence is welcome and compatible within the larger glut of brands and shops of the AirportCity. Even if they reached an agreement, a smaller arts venue without the resources simply wouldn’t be able to execute a similar venture at this time of deep cuts when staying afloat is the priority. Would the AirportCity (or even airport) meet the organisation half way and give it the freedom to work outside and even question its rigorously managed environment? Perhaps one-day, institutions such as Tate and MoMA will follow the Rijksmuseum and position themselves within the retail space of the inevitable expansions of the worlds larger airports to market their respective brands and showcase works from their collection. But if so, will they meet or at least attempt to meet the challenge of presenting work successfully? Perhaps in the meantime by using their vast, vast resources and engaging in now much needed cultural philanthropy, the holding groups of AirportCities across the world could countenance cultural activities and commission new permanent works, collaborate with artists and organisations who would make the traveller stop and think, rather than stop and shop.

This text was written in 2010. All images by Jack Welsh.