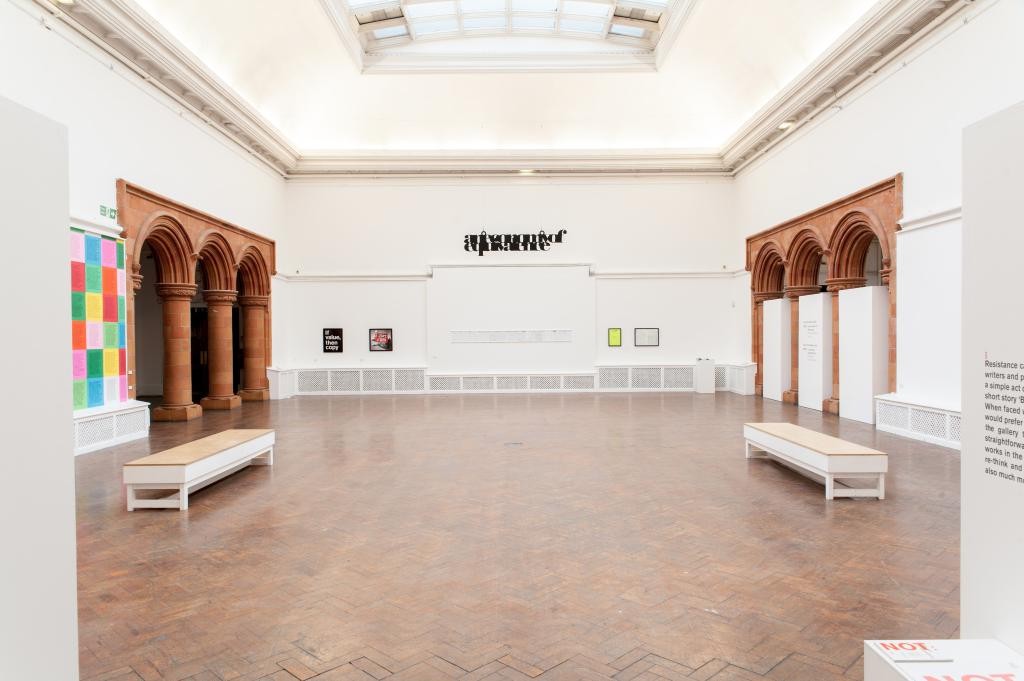 In Herman Melville’s novella Bartleby, the Scrivener (1853), the narrator recounts the story of Bartleby, a scribe he once employed in his Wall Street law firm. Initially a fastidious worker, Bartleby one day rejects a directive by stating, “I would prefer not to”. Stunned by this sudden insubordination, his superior skulks away. Taking Bartleby’s initial act of resistance as its conceptual departure point, this exhibition consists of six artists who propose alternative modes of resistance from within the global art market.

Encompassing several mediums, the curators present a diverse yet remarkably serene selection of artworks. There are no bombastic visuals or grandiose statements. Instead the complexities of institutional critique, globalisation and capitalist economic systems are slowly unravelled; new relationships between works are teased out.

Liam Gillick’s placid text-based wall statement, Of Bricks (2012), comes alive in dialogue with Jenny Holzer’s adjacent Inflammatory Essays (1979-1982). Holzer’s grid of luminously printed coloured posters read like the remnants of a faded campaign, referencing their history as Manhattan street posters in the 1980s. On closer inspection, the sheets list various manifestos. However the typeface and size is identical throughout; any traces of autonomy are absorbed by uniformity. Drawing on the loaded political and artistic history of the manifesto, Holzer’s posters succeed in transforming Gillick’s ambiguous statement, ‘Like a ton of bricks’, into a weighty comment on the transmutability and dissemination of the art objects.

Andrea Fraser’s disconcerting video Inaugural Speech (1997) wryly appropriates an exhibition opening speech. Speaking into a microphone, Fraser literally addresses the power structures of cultural institutions. Her face is exhausted from holding a disingenuous smile. The narrative of Fraser’s speech blurs she splices together the perspectives of a museum trustee, artist, curator and gallery visitor into one continuous monologue. Delivering her speech from the public platform, arguably the most influential site of resistance, Fraser’s simple gesture democratises the social hierarchies of the museum by flattening them – it’s a devastating institutional critique.

Nearby, a suited Carey Young is being coached to deliver the line ‘I am a revolutionary’ to camera. The audition isn’t going well: Young’s delivery is lacklustre and unconvincing. Situated in an office with a floor-to-ceiling window, Young’s deadpan video I am a revolutionary (2001) plays out against a motif of neo-liberal capitalism: a City office block. While Fraser and Young embed characterised versions of themselves within highly orchestrated contexts, they propose two differing modes of resistance. While Fraser is challenging and direct, Young subtly suggests art can instigate change by operating within the dominant social and economic paradigms. Like with Gillick and Holzer, both works complement together dynamically.

Bartleby’s act of resistance towards imposed capitalist structures represents a challenge to existing corporate and economic ideologies. Like Bartleby’s firm but passive action, the curators have allowed the works to stake their own positions, yet have still managed to draw out resonant correlations. This is crucially underpinned by an overarching awareness of the contradiction in framing artistic acts of resistance within an institutional gallery.