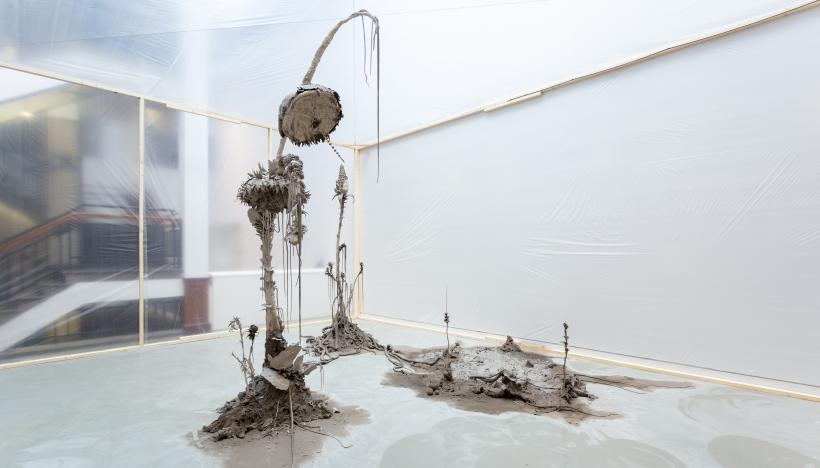 This review was first published on thisistomorrow on 14 June 2018:

In his 2013 book, ‘Making: Anthropology, Archaeology, Art and Architecture’, anthropologist Tim Ingold argues for the importance of making as an artistic methodology. For Ingold, this intuitive process is one of growth, executed in constant negotiation with materiality: thinking through making. ‘Material Environments’ champions this perspective by bringing artistic research and production processes to the fore.

Ben Roberts, curator and director of The Artists’ Research Centre, has invited five artists to transform The Tetley into a series of evolving idiosyncratic working environments. We are invited to engage with a vivacious range of multidisciplinary approaches. Phoebe Cummings has erected a large plastic covered frame within the Atrium space. Within this microclimate, Cummings is slowly cultivating an imagined landscape out of unfired clay. Meticulously crafted, these fragile baroque forms are assemblages of fauna and trailing vines; cracked segments recall the cadaverous serenity of bleached coral reefs. Wet clay and fresh thumb marks provides evidence of Cummings’ reoccurring presence. An adjacent room containing sculpting tools and contextual reading material is superfluous; these rich works don’t need over-elaborating – their form ignites our imagination.

Harold Offeh’s evolving archive ‘The Real Thing: Towards an Authentic Live Archive’ (2018) is comprised of several multidisciplinary components. Rows of 1970/80’s LPs, each entitled ‘The Real Thing’, playfully introduce his interest in interrogating how historical cultural identities, and collections, are formed. Collaborative performance work ‘Lounging’ (2018), in which Offeh and performers recreate the pose of American Soul singer Teddy Pendergrass within The Tetley, corporeally reframes this historical cultural signifier in the present day. Archives are critical sites where identity, authenticity and narrative are contested. This makes the archival display of 12 video works, such as ‘Being Mammy, (Mammy’s Looks)’ (2004-07), in which Offeh performs within various and often humorous contexts, a thrilling testament to Offeh’s critical oeuvre.

Inspired by Yorkshire’s cult status as a UFO hotspot, Serena Korda has created a new immersive and raw sound work, ‘Clairaudience’ (2018). Korda’s research process is mapped across three galleries. Vitrines house copies of the legendary (and now defunct) UFO Magazine – obscure internet forums, before the internet. Maps of Tormorden pinpoint where Korda recorded sounds following a UFO tour with local groups. A ‘glass harp’, an instrument associated with the occult, has been created out of glasses donated by visitors and played during an Experiments Workshop during the exhibition. By presenting this research material, Korda mischievously influences how we interpret the illusory sounds of ‘Clairaudience’; at one point I genuinely thought I heard the X-Files theme.

Keith Harrison’s installation ‘Bad Shit’ (2018) smells awful. Harrison has rigged a fleet of large white barrels – each topped with a small red balloon – for fermenting yeast, sugar and water. This act references the Tetley’s industrial brewing past while revisiting Harrison’s previous material experiments with yeast; in 2007 he baked chapatti bread dough and spices at Camden Arts Centre until the smell became excruciating. The resulting gas slowly pumps into an adjacent room in The Tetley, inflating a 3.5 metre red ball wedged between the oak panelled walls. Teetering between installation and workshop, the balloons become a heavy-handedly metaphor for the flows of capital and power relations between employer and worker.

Joanna Piotrowska’s photographic series ‘Shelter’ (2016) taps into the Foucauldian notion of locally realised utopias. Piotrowska has collaborated with sitters within their own homes, arguably where people are at their most vulnerable, and asked them to construct, and pose within, makeshift dens. There is something genuinely haunting with these jarring images. While this could be the erosion of childhood innocence or the suggested socio-economic status of the subject, it is most likely the plight of refugees and homeless who seek shelter. ‘Material Environments’ is sprawling, contradictory, joyous, frustrating, collaborative and open-ended; and is all the better for it. It suggests that contemporary artistic research is embedded within wider societal frameworks, generating value well beyond the gallery space.

This review was first published on thisistomorrow