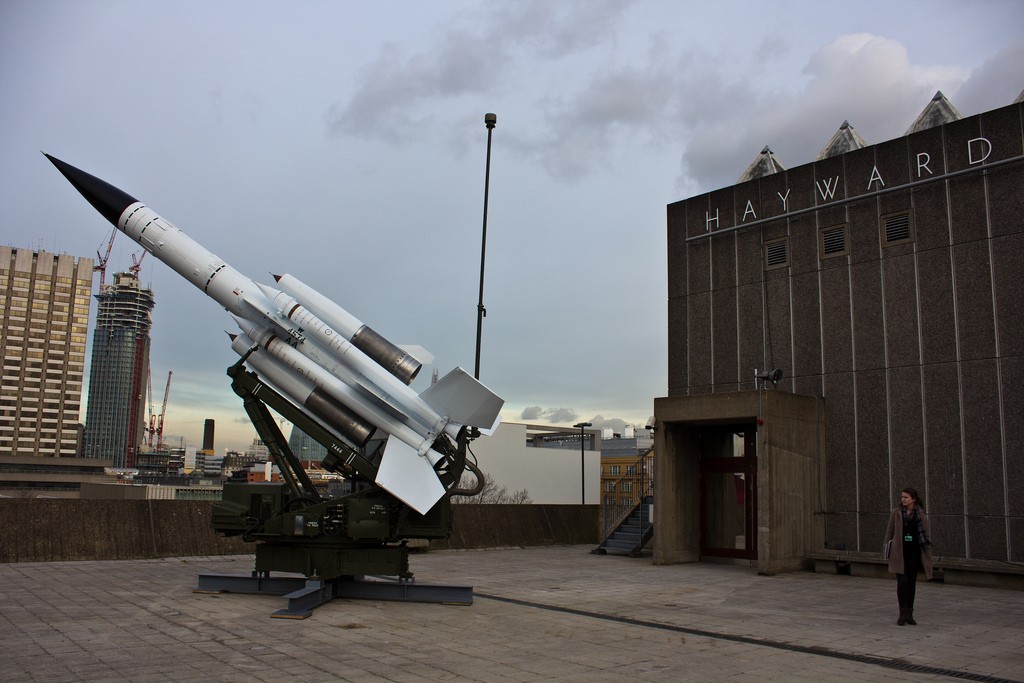 With campaigning for the 2015 General Election vigorously under way, three artists – Bob and Roberta Smith, Russell Shaw Higgs and Gordon Shrigley – will contest Southern seats as independent candidates. Whilst all are unlikely to win, their actions nonetheless raise an interesting question: at what point did artists feel compelled to infiltrate and challenge the political system? Britain’s current political and social landscape is dramatically shifting, perhaps more so than ever before. However, the intricacies of our current climate were sown long, long ago.

First off is Simon Fujiwara. Upon entering the gallery, you encounter rows of white plinths lit by heavy and metallic hanging lights reminiscent of office lighting from the 1970s. This creates a simultaneously dramaticised and anaesthetised environment. Atop of the plinths are an array of anomalistic objects; often conflicting, always curious: two banal sweeping brushes, apparently from the social clean up after the London riots in 2011; a full size replica balcony from Canary Wharf redevelopments; Sam Taylor-Wood’s portrait of David Beckham sleeping (David, 2011) to name a few. It’s hard to not look at the scale model of The ArcelorMittal Orbit without thinking of Boris Johnson playing politics with Lakshmi Mittal in a bathroom during a fundraising gala. Funnily enough, it’s a rather apt metaphor to guide you here. 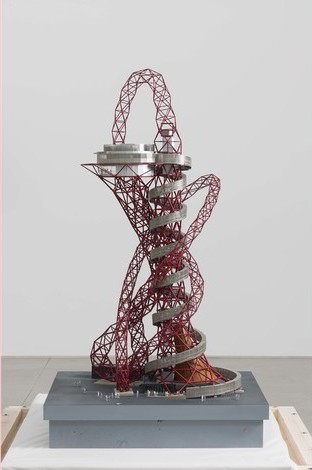 Meryl Streep’s Thatcher costume from Phyllida Lloyd’s The Iron Lady (2011) lays silently in a glass case. To its immediate left: a half tonne piece of coal from the last remaining coal mine in the Midlands. Fujiwara’s curation sometimes lapses into simplicity and could be open to accusations of a Left wing undercurrent that will infuriate some viewers. However Fujiwara’s irreverent appropriation of objects deliciously combines with his sharp and wry critique of neo-liberal capitalism. His inclusion of a battered VHS depicting the artist playing Mr Banks from Mary Poppins (aged 9) in a school play is testament to this. By incorporating a relic from his own past, Fujiwara subtly suggests that history is subjective and anachronistic – how will our present be recorded in a digital age?

Jane and Louise Wilson adopt a more confrontational approach that focuses on three sites of social unrest in Britain. Huge black-and-white photos of anti nuclear protesters at Greenham Common in Berkshire dominate the space. The two other sites are Victor Passmore’s troubled 1950s public art project in Peterlee, Durham, and Orford Ness in Suffolk, a contested military site during the Cold War. These spaces are abstractly revisited in the gallery through a variety of mediums. Sculpture and installation are prominent: empty, ethereal checkpoint stations; limp gloves hanging from cages (Stuart Brisley, 1=66,666, 1983) and architectural models. An overlong black and white yardstick is a reoccurring motif, referencing both time and architectural space. Together, it’s a reflective, highly personal and emotionally charged selection. 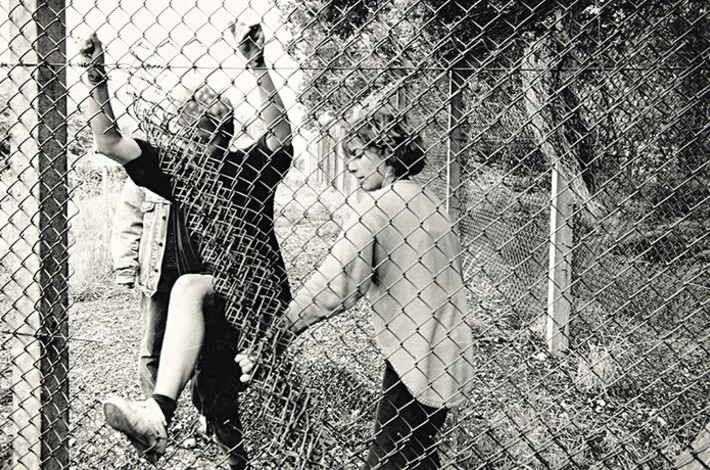 Unknown photographer: Lyn Barlow and two other women breaking through the fence at Greenham Common in the 1980s

Elsewhere Hannah Starkey and John Akomfrah both dip into Arts Council collections to curate their own respective photography and film orientated selections; both are highly resonant to their respective practices. Akomfrah’s film selections, taken from between 1953 and 2003, focus on the emergence of artist/filmmaker at a time when the medium was developing. The films are primarily presented on monitors with headphones along with several large scale projections. There’s hours of material. Like an expert musician thumbing through a collection of rare vinyl, Akomfrah revels in his role as archivist and curator. Starkey’s is the weakest selection; the relationship between the excessive photographs and collages of commercial magazine imagery fails to ignite.

Arguably the most captivating – and dense – section is Roger Hiorns chronological mapping of the BSE crisis. Applying artistic, social and scientific perspectives, Hiorns slowly and expertly charts ‘mad cow disease’ and the development of its human strand, Creutzfeldt-Jakob disease (vCJD). Again, there is a mass of information to process. Wall texts; thick, leather-bound twelve volume Government reports; a Damien Hirst formaldehyde cow – you could spend hours in this section alone. Hiorns weaves a compelling narrative of a very British crisis, holding up a mirror to our current media saturated times in the process. 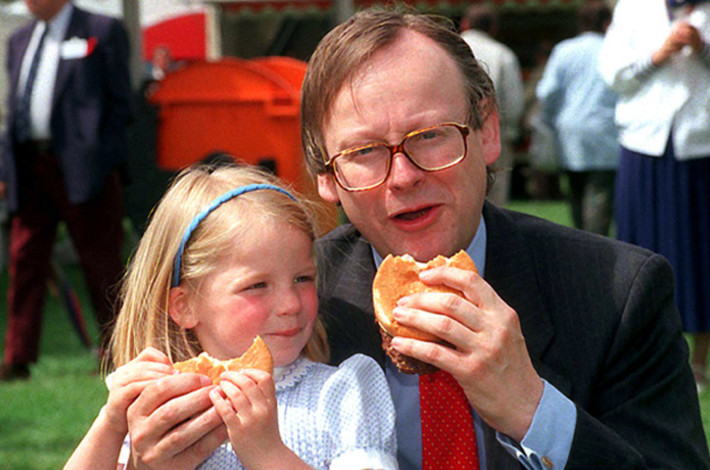 The then Minister of Agriculture, John Gummer, even invited newspapers and camera crews to photograph him trying to feed a beefburger to his four-year-old daughter, Cordelia, at an event in his Suffolk constituency. She refused.

Samoan born but inherently British sculptor Richard Wentworth closes the exhibition. It is packed with objects and artworks, including Tony Cragg’s wall mounted plastic sculpture Britain Seen from the North (1981), which he made as an outsider living in Germany in response to Britain’s economic and social difficulties. Relationships and assumed positions, whether geographic or political, underpin Wentworth’s hands on response. Post war optimism visibly dissolves in the light of new threats and a shifting world dynamic. However it’s the inclusion of a six tonne Bloodhound missile from the Cold War era that gives the exhibition a powerful exclamation mark. Although never fired, the decommissioned rocket sits menacingly on the Hayward’s outdoor pavilion, silently aimed towards the sky awaiting the order. It’s an omnipresent and theatrical symbol of power and mass destruction: the ultimate deterrent. Against the backdrop of London’s famous landmarks and current foreign policy, I couldn’t help but wonder: how many armed weapons are primed in London right now?

History is Now is an intense yet challenging exhibition that makes serious demands on the viewer. Lydia Yee’s current Barbican exhibition Magnificent Obsessions: The Artist as Collector adopts an institutional focus that presents thousands of objects gathered by individual artists. At The Hayward, there is a resonance with this, yet the focus is purely on the artist as curator – and it’s better for it. Its most successful element is not becoming an entirely unwieldy, messy affair. Instead it taps directly into artistic energy; the same energy that has seen Smith, Higgs and Shrigley take to the campaign trail to blur the boundaries of art and politics once more.

All images courtesy of the Hayward Gallery/Southbank Centre