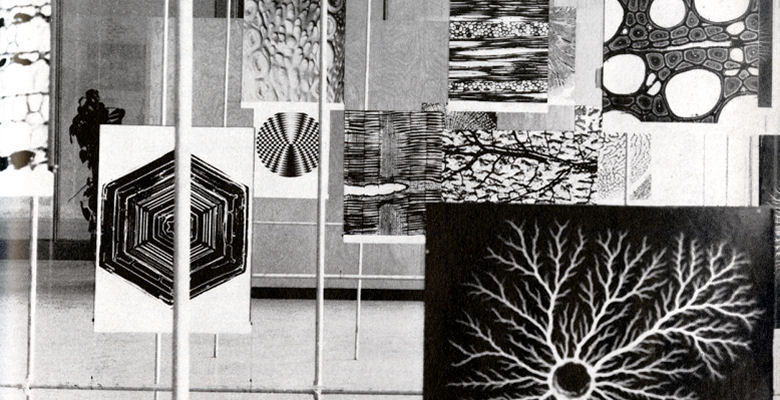 In 1951, Hungarian-born polymath György Kepes organised The New Landscape at The Massachusetts Institute of Technology, where he had worked since 1947. An ambitious experiment in form and design, the exhibition paired Kepes’s own Modernist art works alongside a range of manipulated scientific material, which, together, demonstrated analogous forms and patterns. This visual landscape synthesised Kepes’s belief in the interdisciplinary potential that existed between art and science.

14 years after his death, interest in Kepes has been recently stirred by a first solo exhibition in the UK at Tate Liverpool. Drawing attention to his experimental photographs, photomontages and photograms produced in Chicago between 1938-1942, the exhibition staked a claim for Kepes’s enduring influence. Across the city at Liverpool John Moores University’s Exhibition Research Centre, Kepes’s work as exhibition designer and organiser is surveyed in the The New Landscape.

The ERC exhibition is dominated by a large modular structure which was the lynchpin of Kepes’s original 1951 exhibition at MIT. Around twelve feet tall, the structure is constructed from cold, thick metal piping, reminiscent of a scaffold, possessing the architectural resonance of several temporary gallery walls. Numerous images produced by Kepes are suspended in the structure using steel wire and clips. Additional images are fixed to nearby walls around the structure. This creates a complex latticework of contrasting forms and steel wires, which was Kepes’s original intention.

Kepes’s black and white images falls into two distinct categories: his own experiments with light, and imagery produced by manipulating visual scientific material, such as blood vessels, cell structures and strands of human hair. There are formal commonalities between the two sets of images: white circles break up compositions like a tumour on an x-ray; organic bodily forms are overlaid with aerial views of the city; science and art collide in an ethereal form. In magnifying these images, Kepes forged an abstract language from the disparate material he amassed.

It is evident Kepes was influenced earlier in his career by the photomontages of Hannah Höch and Raoul Hausmann. His own experimentations with light, embracing chance and pushing the medium of photodrawing, are as competent as his contemporaries Man Ray, László Moholy-Nagy and Christian Shad. The modular structure itself recalls Richard Hamilton’s analogous display Growth and Form (1951), which was restaged as part of his retrospective at Tate Modern last year. However, the visual dynamism of Kepes’ original display has been somewhat diluted by our familiarity with contemporary exhibition making practices. We have been undeniably spoilt by the rapid progress technology has made since Kepes time. Inevitably, this has impacted how we read the conglomeration of images.

However, The New Landscape elevates itself from a simplistic restaging by deftly including a selection of Kepes’ archival correspondence. Kepes’s archive is a significant resource in its own right. It reveals the full extent of his interdisciplinary methodology and is crammed with material gathered from institutions including corporations, scientific labs and art museums throughout his career. Written correspondence was critical to Kepes’s activities and the decision to exhibit a handful of letters, displayed away from the structure, is a highly effective decision.

Chronologically presented, the letters cover the period from Kepes’ publication of Language of Vision (1945) through to his book The New Landscape in Art and Science (1956). Each letter is riveting. You feel compelled to read each word, simultaneously adopting the guise of archivist and voyeur. The typewritten words crackle with energy that is drenched in the author’s personality. This is the purgatory of black ink; forever soaked into the jaded paper. Handwritten corrections shatter the impersonal nature of the machine, injecting morality into the exchanges while heightening our own historical awareness. How will our own word processed documents and emails be read in the future?

For such aesthetically slight devices, the letters provide an excellent counter balance to the physical dominance of the modular structure. They tease out the wider social and political milieu that Kepes’ operated – and often struggled – within. Buckminster Fuller writes to praise Kepes’ interdisciplinary efforts while Hilla von Rebay, then director of Museum of Non-Objective Painting (known today as the Guggenheim), fiercely rebukes his request to appropriate imagery from a Kandinsky painting for fear Kepes will ‘reduce’ it to a pattern or wallpaper. It feels critical that the first letter displayed is from László Moholy-Nagy. Kepes’s career was heavily intertwined with Moholy Nagy, having left Budapest for Berlin to work in Moholy’s design studio and eventually, accepting Moholy-Nagy’s invitation to head the Light and Color Workshop at the New Bauhaus in Chicago in 1937. While Moholy-Nagy died the following year, his presence reverberates throughout this exhibition.

Two particular exchanges are noteworthy. The first is a tempestuous dialogue between Sibyl Moholy-Nagy, noted art historian and widow of László, and Kepes. Sibyl seethes at Kepes request for feedback about his recent publication Vision + Values (1965-66), admonishing him in an extraordinary three-page letter that catches him off-guard. In a personal and professional assault, Sibyl attacks the contradictory nature of Kepes’s mission in unifying art and technology while working for an institution which provided scientific military research during the Vietnam and Cold War. Later correspondence between the pair is displayed nearby. Three years have passed and Sibyl is more receptive to Kepes. However, her scepticism in his project is still evident. For left-wing Kepes, his strong association with MIT meant his pedagogical mission was influential yet undeniably conflicted.

The second notable exchange is Robert Smithson notifying Kepes of his withdrawal from the 1969 São Paolo Bienal, criticising his curatorial proposal: ‘To celebrate the power of technology through art strikes me as a sad parody of NASA.’ Requesting that the artists cede artistic autonomy to create a “synergetic system” of collaboration, Kepes was surprised by Smithson’s withdrawal and rejection of his ideas. At this stage, the exhibition could have weaved in contemporary material to support Kepes; it is stronger – and more balanced – for resisting this temptation.

The New Landscape supports Tate Liverpool’s reassessment of the influence Kepes yielded through his artistic, publishing and pedagogical activities. If Kepes modular structure sought to present new visual ways of understanding the relationship between art and science, then this exhibition succeeds in asserting that Kepes possesses contemporary value.