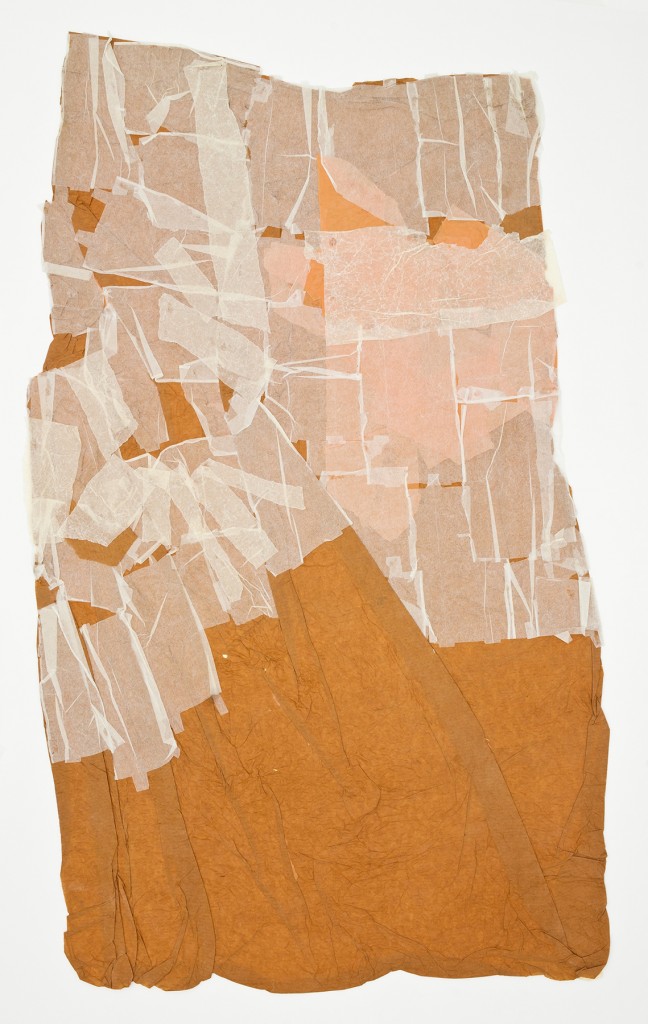 What significance does the studio hold for an artist? Some artists embrace it as a site to think and create, often working within a communal space. Others reject it outright in favour of alternative strategies of production. On entering Romanian artist Geta Brătescu’s new exhibition at Tate Liverpool, her first UK solo exhibition, it is immediately clear that the studio holds particular resonance for Brătescu: the first two works we encounter are both entitled The Studio.

The first, and earlier work, is a framed lithograph consisting of three sections. It presents an enigmatic scene consisting of black lines puncturing a white background. Figurative elements appear within this unclear space. Is that an easel? A set of windows, perhaps? The abstracted nature of the print voids any certainty. It’s claustrophobic: a hot mess of black ink.

Adjacently, a black and white video projection loops. The camera’s focus is impatient, panning away before the eye can rest – a denial of clarity. Gradually the elements within the lithograph come to life on film; several rolls of paper standing vertically, awaiting usage; a black coat hanging on the back of a door; those windows. Then Brătescu herself appears. Lying on a chair, she is silent and pensive, positioning herself within the space. What quickly becomes apparent is that the studio, is in fact, a stage for the nearby series of performative photographs. It’s a powerful start that threads together a series of sculptural, photographic and video work extremely well.

Since this time, Brătescu has gone on to produce an exceptionally varied and prolific body of work over sixty years, incorporating performance, sculpture, printmaking and daily writing amongst many other mediums. Independent Curator, Eleanor Clayton and Lauren Barnes, Assistant Curator, Tate Liverpool, manage to do justice to Brătescu’s artistic mission by anchoring the exhibition thematically around her commitment to the drawn line.

There is fluidity between each theme, mirroring Brătescu’s own diverse and often conflicting methods of production. The second section, ‘theatricality’, is a key trait within Brătescu’s own impish personality and evident throughout. Costume for Ephemeral Celebrations (1987) links directly to Brătescu’s inspiration by the 1980s boom in Romanian theatre. The small outfits, displayed in the manner of an ancient relics in a glass case, resemble colourful paper tunics; joyful yet extremely fragile. One costume is reminiscent of a low-fi version of the centrepiece adorning Klimt’s The Woman in Gold (1907).

Brătescu’s Medea drawings, or ‘drawings with a sewing machine’, incorporate fabric, sometimes material left by her mother, and are a direct challenge to the feminine associations of material and process. They also demonstrate Brătescu’s literary and cultural influences, chiefly the Greek mythological character Medea, who kills her children to punish her husband’s betrayal. However, while many of these drawings, such as the Medeic Callisthenic Moves (1980-81) series, are technically excellent, they are surprisingly unaffecting given the context; the initial momentum slackens.

In glass panels above the doorway to the gallery, Brătescu has designed two site-specific vinyl collages, developments of her recent work. They are a welcome addition and demonstrate an inherent playfulness alongside a total commitment to drawing and experimentation in form. It would have been fantastic if Brătescu had been given free reign over the main Tate foyer windows, but perhaps this would have confused visitors to the co-current and higher profile Jackson Pollock and Glenn Ligon shows.

These final collages return us to our starting point: Brătescu’s Romanian studio, an enduring non-political site where she continues to push herself artistically and conceptually, a sharp mind still whirling at nearly 90 years old. If the Pollock and Ligon exhibitions offer new perspectives for two art historical figures – and eras – then this introductory survey of Geta Brătescu offers a well considered counterpoint.

It’s a strong summer programme this year at Tate Liverpool – and it would be a shame if the Pollock day-trippers skipped this.

This article was originally published on The Double Negative