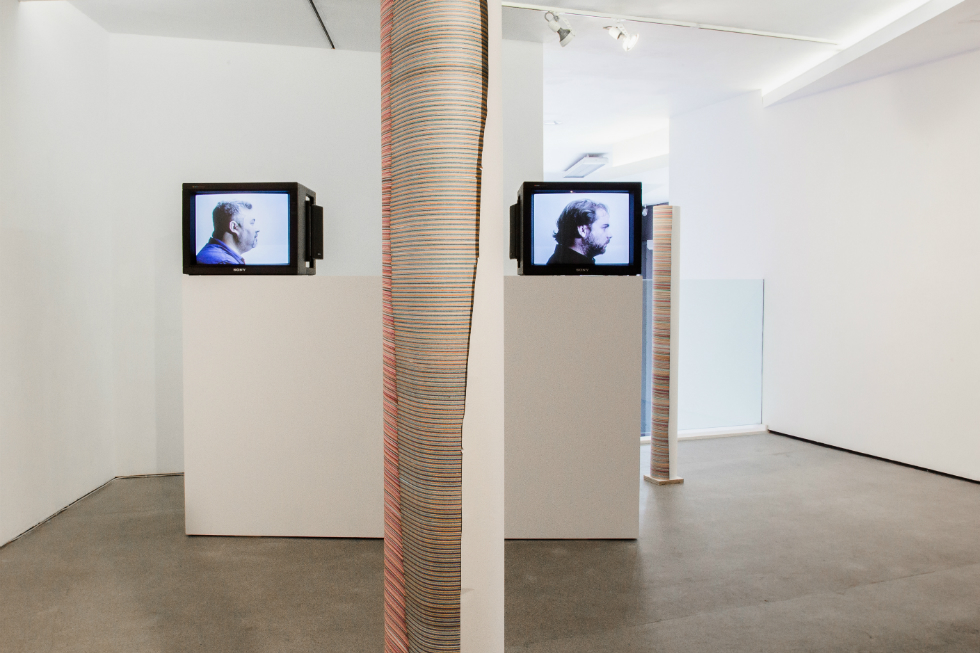 I reviewed Castlefield Gallery’s recent exhibition AND A 123 for The Double Negative. Read the original review here.

Lisa Watts is kneeling on the floor, slicing wine gums on a small plywood box. She pops them in her mouth before standing up and affixing a metal tape measure to her belt. Slowly, Watts extends the tape end vertically, only stopping to balance a clear plastic bag and the (now chewed) wine gums onto the tip. As the tape is carefully fed upwards, the purpose of these actions suddenly becomes clear: to stick the sweets onto a protruding white wooden panel high above. I’m silently urging it upwards; it’s pure drama. Finally – after an eternity – the tape connects with the panel. There are now several gobs of synthetically coloured wine gums stuck to it.

This action is part of Watts’ Not a Decorator (2017); a body of work exploring how performance is presented within a gallery context. In each performance Watts activates mundane domesticated objects – from circular red plastic washbasket to rolls of greaseproof paper – through minimal and repeated gestures. These acts place emphasis on both materiality and the performative nature of Watts’ actions, seeking to unlock the sublime within the everyday.

“This is Noel Clueit’s Run in / Run out (2016), two recordings featuring every record he’s ever played in his studio”

AND A 123 brings together five other UK-based artists alongside Watts who explore the relationships between everyday objects, routines, repetition and spectacle. As you enter the gallery, a song begins to play… But is brutally terminated within seconds. Silence and crackling vinyl fills the sudden void. As you try and reconcile the noise, the process repeats, creating a fractured sonic dynamic, which is oddly satisfying. This is Noel Clueit’s Run in / Run out (2016), two recordings – samples from the run in groove of the A-side; B-side fade outs – featuring every record he’s ever played in his studio. It is acoustic purgatory; doomed to offer only beginnings and ends – never more. As our ever-diminishing attention spans crash, dragged down by technology such instantaneous track skipping, Clueit’s analogue soundscape evocatively considers productivity and the artistic process. 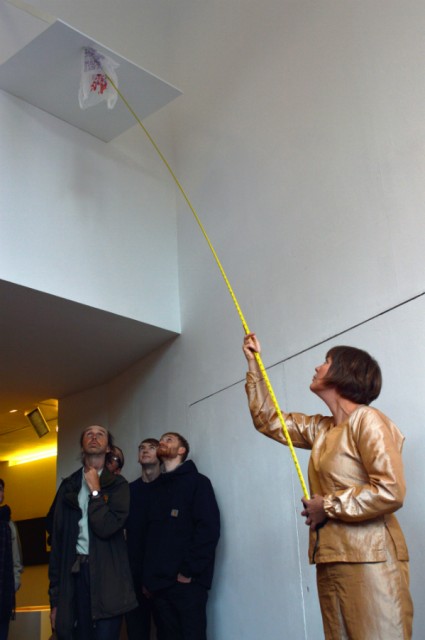 Clueit’s work finds synergy with Nina Chua’s intensive material explorations. Three of Chua’s Rolls series – five-foot paper rolls standing upright on wooden blocks – are exhibited. Each roll packs hundreds of brightly coloured marker pen lines that following the curve of the paper and aesthetically reference Chua’s intervention on the front shutters of Castlefield Gallery (pictured, below). Just before each sheet ends, the lines screech to an abrupt halt; Roll 2 is agonisingly close to completion. Yet it’s how Chua’s surfaces are built up that is most interesting, evident in Chua’s Marker series, several of which punctate the exhibition. Beautifully rendered, these imperfect aesthetic works wear their heart on their sleeve; you can see where pen ink runs dry and the manner in which lines are obsessively layered. Taking time to absorb Chua’s work offers rich rewards.

“Is the work finished? Or perpetually unfinished?”

Oliver Tirré’s Practice Surfaces (2015) raises similar questions around routine and practice. Three gessoed panels are presented under spotlights, each on plinths fabricated to the same dimensions as Tirré’s studio desk. The panels are made of layers of watercolour wiped clean between each application, leaving an array of marks and textures that becomes the surface. By referencing the studio in its presentation, Tirré subtly blurs the line between everyday artistic processes and the process of exhibiting, a boundary further obscured by the title; is the work finished? Or perpetually unfinished? 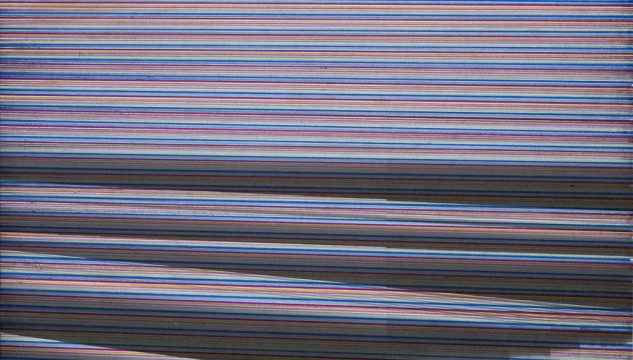 The engaging, and often slippery, dialogue between Clueit, Chua and Tirré’s work is purposefully disrupted by Maeve Rendle’s two channel video installation Either Or (2017). It depicts two men at side profile looking forward in the same direction. Concentrating hard, they absorb and translate lines from Samuel Beckett’s libretto, Neither, read out in French and English off-screen. They do this amidst awkward gaps, silences and repetition. Referencing Beckett’s use of self-translation to boil his work down to its essential elements, the work is disconcerting; we are deliberately thrown into this cylindrical and uncertain process.

David Rickard’s C (2016) is a large circular LED advertising facade hacked to show the tide rolling onto the central point. Visually impressive, and undeniably hypnotic, the swirling lights are rendered abstract by limited space. Reflecting its primary advertising function, it is best viewed from the street. Considerably more discreet is i (2016), found through a tiny eyehole inviting you to peer in. Your reward is a jolting image of an endoscopy pill plunging through the linings of Rickard’s body. However, the spectacle of technology feels too vast to fleetingly touch upon, resulting in Rickard’s works feeling disconnected from a successfully constructed show.

AND A 123 provokes a delayed satisfaction that recalls Fischli & Weiss’ seminal work The Way Things Go (1987); the components come together, albeit on their own paths. Ultimately, it is a vehicle for Watts’ own research for Not a Decorator. When Watts is not performing in the gallery, the objects lay dormant under 12 boxes dotted around the space. The issue of what represents within the gallery during this time is addressed through a three channel video screen depicting the performances – but with all visuals blacked out apart from a disembodied object in action, reminiscent of magic tricks performed by a pair of floating hands. This aesthetic association isn’t coincidental; it playfully suggests the potential magic of everyday objects.