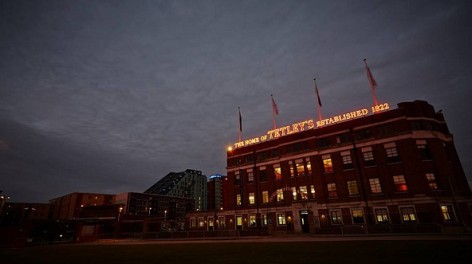 Two new exhibitions and a series of artist residencies feature in the second phase of The Tetley’s relaunch: A New Reality Part 2.

Launching a major new contemporary arts space isn’t an easy task. It’s considerably harder if you choose to restore the defunct headquarters of an iconic local brewery. Defined by this epic transformation, The Tetley‘s inaugural, three-part exhibition programme A New Reality asked both artists and audiences to unpick the rich historical context of the building and its future as a contemporary art centre. When it opened in November, Director Kerry Harker commented that The Tetley is a place “about people; not static exhibitions or finished artworks.” A New Reality: Part 2 (11 April-15 June) continues to test this proposition by launching two new exhibitions and a series of production residencies that explore themes of labour and the “writing of history”.

Sheffield-born artist Ben Cain’s exhibition, Down Time, will present new film and performance pieces that question the notion of work in contemporary society, in both an industrial and artistic sense. Cain will also exhibit sculptural objects that strongly reference traditional handcrafting tools – highly resonant in context of the former brewery. Rachel Adams’ exhibition How To Live In A Flat showcases a series of new sculptural works, inspired by highly functional 1930s modernist furniture design. During each weekend in May and June, Adams, and other artists that she will invite, will inhabit her exhibition space, animating and frequently rearranging the space like a domestic dwelling.

The highlight of The Tetley’s initial programme is arguably its several production residencies; organic projects that aim to diminish the boundaries between contemporary art practice and audiences through active participation. Aidan Moesby will begin his residency by researching The Tetley’s vast, and uncatalogued, archive of objects, letters and documents left after the brewery closed. These will inform new, text-based works that use both traditional letterpress-printing techniques and digital technology. Shifting the focus from the past, Rob Kennedy plans to engage audiences in informal discussions about the role and future of The Tetley as a contemporary arts venue in Leeds.

With both exhibitions unlikely to remain static (Cain’s artworks will be moved, replaced and changed over the course of his project), and with Moesby and Kennedy holding numerous open studios and workshops to develop their production residencies, A New Reality: Part 2 ensures that The Tetley is worth a return trip: even if just to admire the building once again.

This article was originally published on Creative Tourist, April 2014.