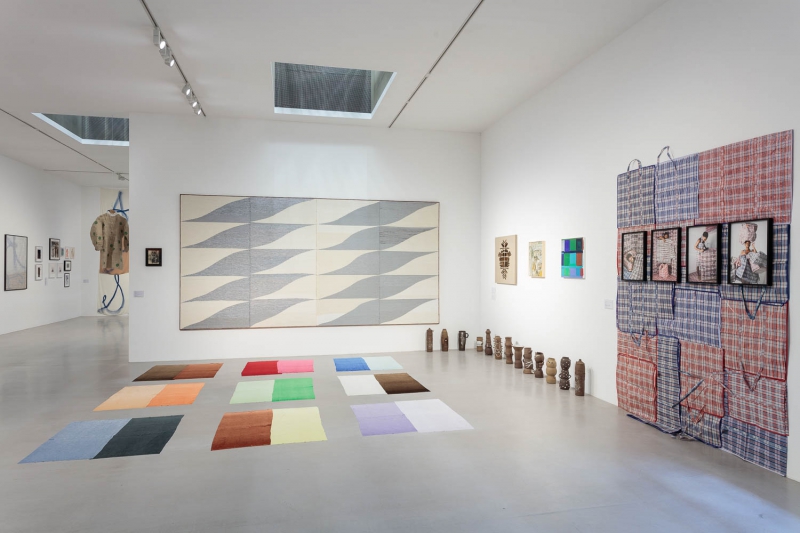 London – One Day Round Up

Since opening in mid-June, there has been near unanimous praise for the geometrically angled building. The last time I was in London, the building hid behind imposing construction barriers, its top carpeted under a blanket of moving cranes.

At ten floors high, Switch House swells Tate’s capacity by 60%. Within four floors are devoted to springing collection works out of storage and into the pristine galleries. The rest of the building is carved up between all-you-can-buy shops, heaving cafes, exclusive restaurants, closed administrative spaces and a bustling top floor viewing deck.

Scaling up the floors, it was Tate Exchange that piqued my interest. When in operation, it will become a residency space allowing Tate to form active collaborations. Excitingly, the public will be invited within the space. 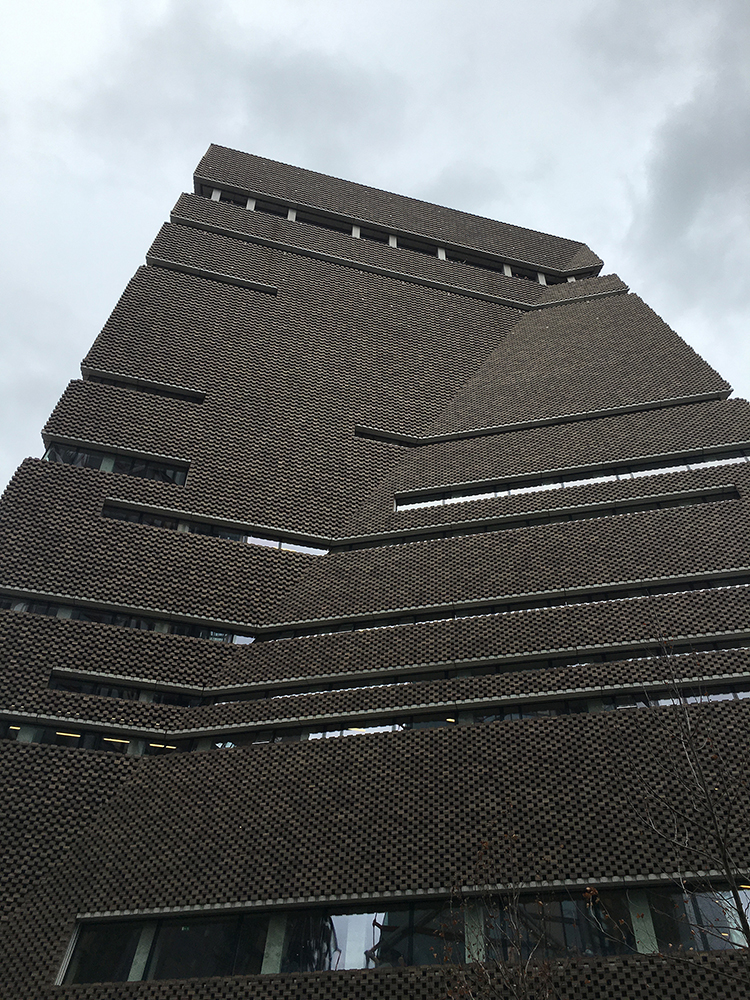 The full opening of The Tanks is the artistic highlight of the new building. Dedicated to new video and performance work, Tate’s embrace of these cavernous former oil drums gives it a clear competitive advantage in the global institutional battle. The Tanks are huge. Dozens of viewers casually lie dotted around the floor of Apichatpong Weerasethakul’s epic multi-channel installation. They are dark and brooding spaces which proudly bare the physical scars of its past life – and is all the better for it.

Tate’s Switch House extension represents a major increase in Tate’s capacity. It also is the manifestation of the institutional shift towards a more collaborative and civic purpose. Whether you feel this is positive or negative step – and that’s an entirely new conversation – there is now more space to shop, consume and to take selfies in front of historically relevant works. It feels more welcoming and lays the groundwork to facilitate performative work over the next few decades.

Welcome to the 21st Century institution.

Featuring an extensive list of video artists, from Marina Abramović to Santiago Sierra, it is inspired by Dan Graham, directly referencing his 1977 performance at De Appel Arts Centre (which is included in the exhibition).

Split into three thematic sections  – performer, audience and mirror – each evident within Graham’s own practice, the show explores the interactivity and reflexivity of film, as well as the role of video in capturing and pushing performance.

Graham is omnipresent; the audience section is set within his pavilion Greek Meander Pavilion, Open Shoji Screen Version (2010). Viewers encounter several monitors showcasing a looped showreel of films within the transparent structure, offering themselves up for display in the process.

It’s an absurd scenario; you imagine how quickly he’d be pulled up in England. Yet this simple action is highly politicised within the context of the American Panama Canal Zone. The brief flash of panic in Alÿs as a bus diverts past him stays in the mind.

Too vast to simply dip into (several works run for over 45 minutes) the exhibition is oddly static; despite Graham’s pavilion, there is limited engagement between viewer and the films. Yet, having watched Cory Arcangel’s web-browsing session Ideas in Action (starbucks.com) (2014) both in the gallery and on the Lisson website afterwards, the true impact of performance lying outside its documentation within the gallery.

Making & Unmaking: An exhibition curated by Duro Olowu is a vast and personal exhibition. Strongly influenced by Olowu’s explosive rise to prominence as a designer, and his travels between Nigeria and Europe, the show brings together disparate range of artistic material, from Yinka Shonibare MBE’s headless figures to West African textiles, each bringing its own social, political and material contexts to the party.

It reminds me of Cotton: Global Threads at The Whitworth (2012) which explored the trade of cotton and the social, racial frameworks through materiality. While Cotton spun its material narratives within its Lancashire context, Making & Unmaking opens up to place the emphasis on the intuitive and idiosyncratic methodologies of each artist.

This freedom, however, is also the exhibition’s main weakness. Clocking in a weighty 70 artists, Olwou’s assemblage is admirable but not entirely convincing; the autonomy of each artist results in a cacophony of visual and contextual noise that dissuades coherency.

Lukas Duwenhögger’s exhibition You Might Become a Park is an uneasy delight. Perfectly suited to the elegant London townhouse architecture of Raven Row, Duwenhögger’s arresting figurative paintings tease us with narratives that you can’t tear your eyes from.

The curatorial nuances serve to heighten this theatricality; a heavy wooden frame is embedded slightly in the wall, an oval painting is propped against the wall. Possessing a strong homoerotic sensibility, his painting often depicts groups of waxy Turkish looking men (his adopted country) exchanging suggestive glances, machismo compositions that rift and recalibrate painterly traditions through secret codes. 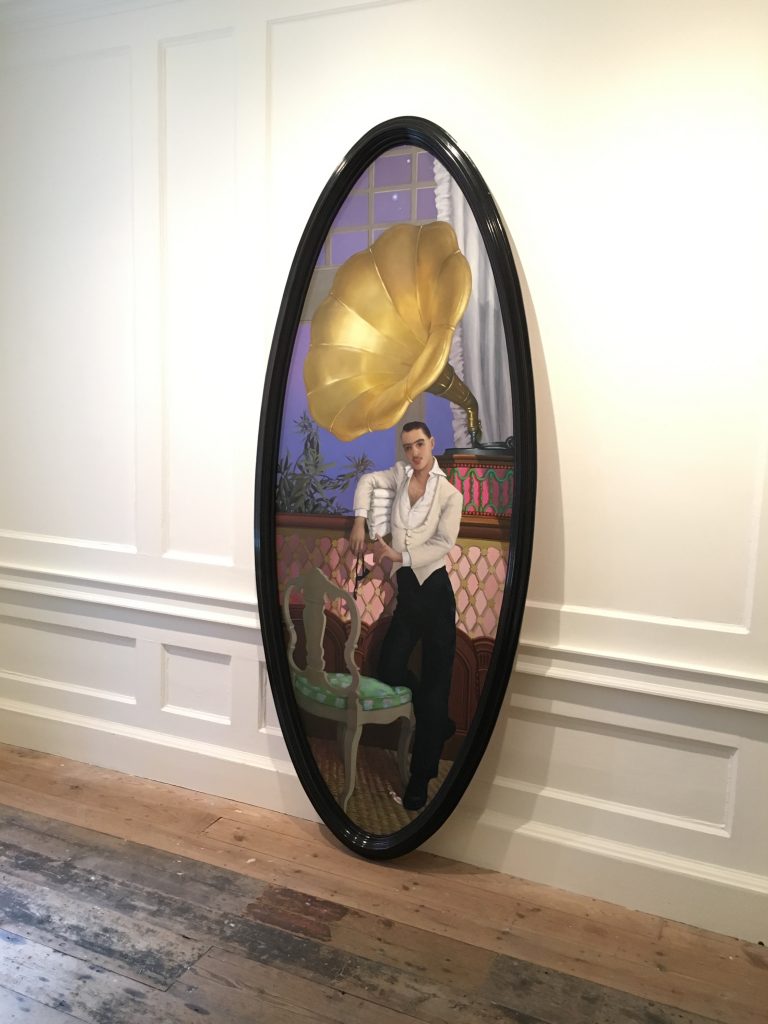 Short-story The Clay Hen accompanies the show, continuing his trait of producing an accompanying text which postulates further narratives. An artist who stated, ‘he’s never been a contemporary artist’, this 30 year survey survey of Duwenhögger is a must visit: enter his idiosyncratic and jarring world at your own will.