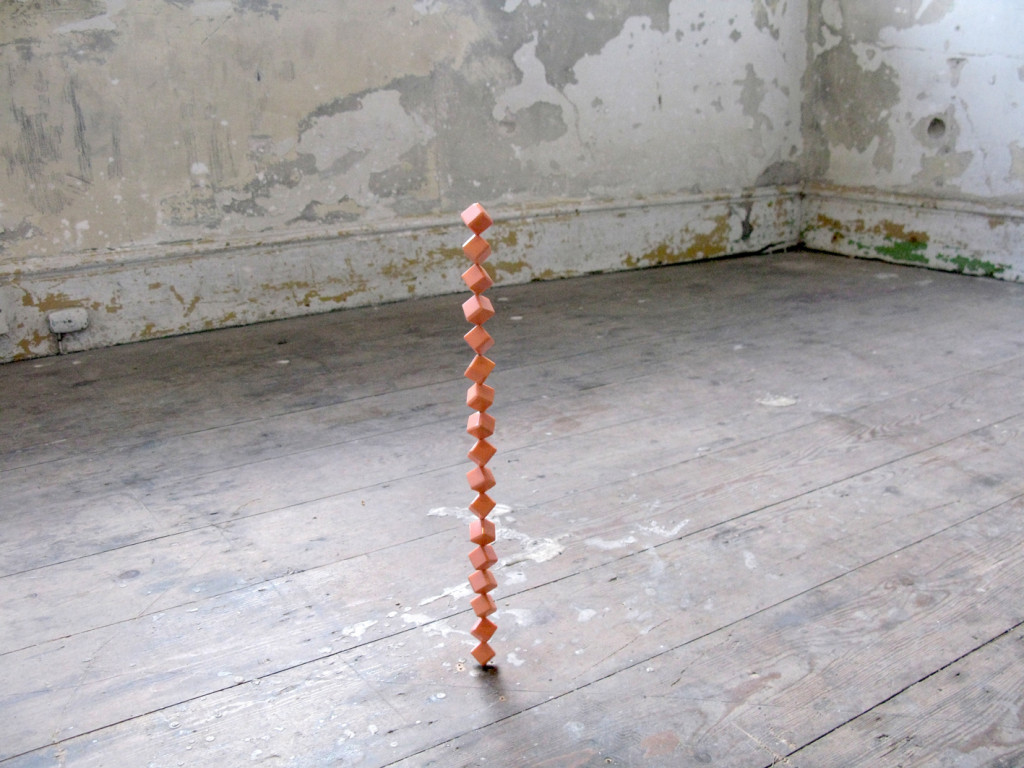 Kevin Hunt is an artist and curator based in Liverpool and a studio member of The Royal Standard. Jack Welsh interviewed Kevin ahead of the opening of ‘easy does it’ at David Dale Gallery & Studios in Glasgow – the first in an evolving trilogy of exhibitions that he is curating.

JW: Can you talk about the concept behind ‘easy does it’?

KH: The idea for the show began with a drunken conversation in an Edinburgh pub with artist Richard Proffitt back in 2010. We had spent the week installing an exhibition in Embassy Gallery and people kept saying the phrase ‘nay bother’ to me. I’d never heard it before but quite quickly worked out what it meant. I enjoyed the friendlessness of the phrase and in the pub Richard and I joked it would be a good title for an exhibition of work that was ‘easy’ to make. Later in the year I was encouraged by Embassy to put together a proposal for the exhibition for the Edinburgh Annuale. I asked the artists that I had in mind and they all were up for being part of it. In the end I couldn’t find a venue and the idea went on the backburner for a while. However I thought the concept had more mileage than a single exhibition and the idea quite quickly developed that it could be a touring show.

KH: The phrase ‘ney bother’ is colloquial. The original idea was that the show would tour with a new title specific for its location. If it came to Liverpool it was going to be called ‘pimps’ – a North Liverpool colloquialism for being easy! I liked the idea that while the phrase was very specific it has different meanings and it could be completely misconstrued. However it began to feel fickle to have a shifting title for each exhibition that didn’t always work.

JW: Were you worried that a changing title would overshadow the work?

KH: In a way but also that it could be perceived as derogatory. That was never the intention.

JW: How will the exhibitions evolve?

KH: The exhibitions will always feature the same artists but the work will change or reconfigure in each venue. In my head I see the exhibition as several acts in a play. The three shows become one show but they individually stand-alone; the whole is greater than the sum of the parts. Some artists will show new work each time but others are creating work especially for each venue.

JW: The artists you’ve selected for ‘easy does it’ all work with a particular aesthetic, something that is identifiable in your own practice.

KH: Each of the artists has aspects of their practice that resonates within my work. This being, aside from a level of complexity in production, that the work has an ease of being as an object. It’s been quite an interesting conversation with the artists as there are strands of their practice that contradict the ethos of the show. It’s a proposition to them to present a side of their work that is paired down to something simple. They’re quite specific works in the show that will stand with this notion that a very simple action can have a massively profound effect or repercussions.

JW: Would you say that ‘easy does it’ is a defence or advocacy of this type of aesthetic?

KH: It’s definitely a kind of advocacy of it. In some ways it is a reaction against a certain type of work that I’m aware is being made through shows that I’ve seen over the last five years. These are shows that have a collection of works that look very casual but on closer inspection are meticulously and painstakingly produced. That work is kind of interesting but I feel that it is also a one liner that seems a little too obvious. With sculpture there is something more that you can do with it. People can remark that ‘I like it because it took them a long time’ and then say to me that ‘you’ve just stacked a load of eggcups – what the fuck is that?’ But actually that process, to me, is a massively and profound thing.

JW: What is it about this process that interests you?

KH: I’m really interested in the point where something becomes art. What was it before this point? What makes it become that thing? The complicatedness in these simple gestures poses questions that can’t be easily answered. In my work there is always potential for something to happen. I can keep objects for years that may or may never become anything. For example several recent work titles have been named after magic tricks from the Paul Daniels Magic Set I’ve had for years!I’ve got a recent interest in magic bizarrely, except that’s not strictly true. I was massively interested in it as a child. I’ve come to realise more recently how everything in life is important to what you are doing; lots of things that I was into as a kid now makes sense. Things that a magician can do look impossible but they actually are happening, either through fallacy or a trick of the eye. A set of sticks can stand on their ends, they can do that but they don’t necessarily look like they can. In some sort of way, there is a connection between this and the idea of pushing something to the brink of what it can do.

JW: The works that you recently exhibited at Castlefield Gallery as part of Tattoo City: The First Three Chapters, were evocative of this.

KH: Yes. The oddness of the space at Castlefield Gallery really interested me. Most of my works were dispersed in ‘difficult’ spaces in the gallery. I really liked the positioning of my work Seeing is Believingon the landing by the stairwell and how close you could get on eye level. It is probably obvious how it exists but I like this fact, it aligns with several works of mine that are balanced and precarious.

JW: My response to Seeing is Believing was that it was a knowing antithesis to Brancusi’s Endless Column.

KH: A lot of my work does respond to ideas that Brancusi had. I’m not keen on making work that is bombastic. I much prefer, especially in a group context, things that are dispersed like punctuation or a formalisation of a space.

JW: Collaboration seems to be inherent in your recent curatorial projects such as CAVE Art Fair and HELD both during Liverpool Biennial. What working relationships are you interested in forming?

KH: With HELD it is difficult to pin down what the project is. It isn’t my work; it’s everyone who has been involved. I saw the potential to ask other people to make a similar image, that of the work being photographed in the hand of the maker. I see the collaborative process as a loose fluid thing almost a by-product as a thing I’m thinking at the time. Collaborations come from chatting to people with a similar interest.

JW: In that sense is it joined with your practice?

KH: I think everything is really. There was a time when I used to thing things were quite separate in terms of my work, curated shows and projects with The Royal Standard. However it occurred to me that they are all the same. With CAVE it was important to state that ‘it took two artists (Kevin and Flis Mitchell) to do this in this city’. We had an interest and desire to make it happen.

JW: How important was your time as co-director of The Royal Standard (2007-11) in shaping this?

KH: Massively. With The Royal Standard the peer network is crucial. In terms of thinking how I work collaboratively, the people who I’ve worked with have all probably been through The Royal Standard directly – or in a ‘six degrees of Kevin Bacon’ kind of way! The experience as a director made me realise if you wanted to do something, you can do it.

JW: What other projects will you be working on throughout 2013?

KH: I will be exhibiting as part of Unspecific Objects, a joint show between two sites, The Royal Standard and Malgras|Naudet, opening 15th February and 22nd February 2013 respectively. I am also working on organising Art Transpennine 13 with Emily Speed and Elizabeth Murphy that will happen across the north of England in September.

‘Easy does it’ is at David Dale Gallery & Studios in Glasgow 2 – 23 February 2013 before touring to Aid & Abet in Cambridge on 6 June and Supercollider in Blackpool on 23 August. This article originally appeared on Corridor8 online February 2013